-Russ Bickerstaff of The Small Stage: “I’ve seen at least three other productions of this show including the touring Broadway version a few years back. Thanks to an impressive cast under great direction, this is easily the most satisfying production of the musical that I’ve seen. Honestly prior to All In, I don’t know that I honestly would have been able to say that I even liked the show. Now I know I do. In the right hands, it’s a great script. All In has brought together the right elements to bring this show together.”

-Marilyn Jozwik of Wisconsin Theatre Spotlight: “Choreographer Alicia Rice has this group executing crisp moves, with lots of effective upper body movement, which works especially well with the bleacher style seating. Numbers such as “Pandemonium” and Oviedo’s athletic “I Speak Six Languages” have loads of energy and movement that seems to burst right off the stage.”

SEPTEMBER 2018: HEDWIG AND THE ANGRY INCH

-Russ Bickerstaff of The Small Stage: “Sweeney carefully places the character’s tenuous fragility into a well-proportioned performance structure that approaches a kind of technical perfection.”

-Jeff Grygny of Play On MKE: “In the title role, the incredibly talented Brett Sweeney surely gives one of the essential performances of the season; whether over-sharing with the audience, quivering like Tina Turner, or twitching on the floor like Iggy Pop, Sweeney delivers it all with courage, a powerful voice, and sensitivity to the moment. This Hedwig is especially tragicomic; we are never far from the wounded human being behind the risque asides and heavy makeup.”

-Evan Rytlewski of The Shepherd Express: “…with the right lead the show is a riot, and All In Productions has found a natural in Brett Sweeney, a Skylight Music Theatre alum who sells not only the laughs but also the trauma behind every tawdry remark… Lydia Rose Eiche is excellent in a nearly dialogue-free role as Hedwig’s mistreated husband and backup singer Yitzhak, a performer who, like Hedwig, is boxed in from being her true self.”

-Anne Siegel of TotalTheatre.com: “The foursome moves smoothly through the music numbers, thanks to the tight direction of Tim Backes… Costume changes are made seemingly in the blink of an eye, allowing the audience to differentiate between the characters and the dilemmas they face. It is an evening well-worthchecking out for musical theater fans and admirers of All-In Productions.”

JANUARY 2018: CONSTELLATIONS
-Mike Fischer of the Milwaukee Journal Sentinel: “[Mitch] Weindorf’s storytelling on this nearly bare stage is clear; modest lighting cues and movement signal transitions while maintaining a brisk pace in a piece that runs just 75 minutes. Weindorf’s actors do the rest… An intense Sapiro makes clear that the laconic Roland’s ostensibly still waters run deep.  Amato gives one of the finest performances of her career as a woman whose intelligence makes her awkward and shy, hungry to belong but scared she won’t fit, as she restlessly searches for a world to call home.”

-Harry Cherkinian of the Shepherd Express: “All In Productions closes its season at the top of its game, showcasing its multifaceted talent for intimate works (such as Circle Mirror Transformation) that focus on the complexity and vulnerability of our relationships.”

SEPTEMBER 2017: NEXT TO NORMAL
-Mike Fischer of the Milwaukee Journal Sentinel: “[Carrie] Gray suggests someone who feels helpless and lost – combined with an angry and fierce determination to be more than a victim and a statistic.  Nervy, aware, and bright, this Diana understands that she may never even be in the neighborhood of normal.  All the more impressive that she struggles on, reaching for the light.”

-Russ Bickerstaff of The Small Stage: “[Steve Pfisterer] brings strength and compassion to the stage as a very human emotional anchor for Diana who struggles against his wife’s condition while battling his own inner conflicts. Pfisterer and Gray have a very earthbound chemistry about them that serves as a really solid foundation for some of the more aggressive songs in the show.”

-Anne Siegel of The Shepherd Express: “Hailey Hentz, a UW-Milwaukee theater major, makes a powerful impression as Natalie. Dressed in a flannel shirt over a decorated tee top and distressed jeans, Hentz looks as though she just wandered in from class. Her emotional range is extraordinary, and one hopes to see her in other productions soon.”

APRIL 2017: CIRCLE MIRROR TRANSFORMATION
-Harry Cherkinian of the Shepherd Express: “Director Mitch Weindorf understands the characters’ underlying complexities within Baker’s minimalist dialogue. The nonverbal gestures speak volumes here, and the uniform excellence of the cast speaks powerfully through the silences—words unsaid, but feelings pushing through to be heard.”

-Mike Fischer of the Milwaukee Journal Sentinel: “Weindorf’s ensemble honors Baker’s silences and subtleties, allowing these characters and this play to develop slowly and with the sort of hiccups that are true to our awkward dance, as we struggle with all it means to be alone, together.”

SEPTEMBER 2016: THE WILD PARTY
-Russ Bickerstaff of The Shepherd Express: “Director Robby McGhee juggles all of the many elements of a crazy Jazz Age get-together made for contemporary musical theater. Perhaps the single best aspect of the production is that it genuinely feels like an untamed party occurring in musical theater format. Emotions feel real and people seem authentic whether they’re in the center of the action or not. In the intimate studio space at the Next Act Theatre, the cast tumbles around in a playful kind of energy that occasionally drifts into the darker edge of things.”

-Clifford Lee Johnson III, co-creator of The Wild Party: “Thank you for a crackling good show last night. Andrew would be as pleased as I was to see that TWP resides in such talented, smart, and sexy [a real necessity for this show] hands… You breathed life into an utterly unique show that’s much closer to THE THREEPENNY OPERA than a traditional musical comedy, which, of course, is why it’s somewhat misunderstood. But you understood it and wailed.”

Mike Fischer of the Milwaukee Journal Sentinel: “Warren — nerdy, gay, and a bit weird — ultimately proves the most likable of this quartet, thanks in large part to a winning performance from Dan Tellez, who captures what’s lovable and true in this lost and geeky soul.”

Amanda Sullivan of the Shepherd Express: “Thoughtful lighting by Alan Piotrowicz highlights the production along with stellar keyboard accompaniment by music director Patrick Thompson… The cast uses a mix of song and talk-singing to great effect throughout and provides an often humorous yet fully developed character portrayal.”

Russ Bickerstaff of the Shepherd Express: ” It would have been far too easy to balance out two pairings with two romances, but Gwon is going for something far deeper here and All-In under the direction of J.T. Backes does a really good job of bringing that to the stage.”

SEPTEMBER 2015: DOGFIGHT
-Jeff Grygny of the Milwaukee Examiner says “All In Productions has given this Milwaukee premiere a treatment as polished as any company in town could (and that’s saying a lot).”
-Anne Siegel of TotalTheater.com calls it “terrifically entertaining” and “a must-see show on their (Milwaukee playgoers) entertainment calendar.” 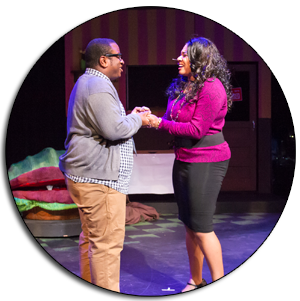 JUNE 2015: LITTLE SHOP OF HORRORS
-Mike Fischer of The Milwaukee Journal Sentinel: “[Mara] McGhee’s grittier take on Skid Row raises the emotional stakes, while underscoring why Audrey and Seymour will do just about anything to find that illusive somewhere that’s green. Even if that means Audrey sleeps with a twisted, motorcycle-riding dentist (a bent David Wortz; think a sexually sadistic Elvis on laughing gas).”

APRIL 2015: THE SHAPE OF THINGS
-Mike Fischer of the Journal Sentinel: “What I can tell you is how good it feels to watch Cinpinski” and says JT Backes gives a “…compelling performance”
-Anne Siegel of TotalTheater.com: “All four of these actors are young, promising newcomers. They strike a nice balance between the play’s poignant and funny moments.”

Milwaukee Journal Sentinel: “‘The Last Five Years’ charts romance’s rise, fall from both directions”
“[Amanda] Carson — whose terrific, wide-ranging performance provides reason aplenty to see this show — presents a Cathy who is comparatively reflective, burdened as she is by the history of what she’s lived and pining for all she has lost… [Michael David Stoddard] does a good job of capturing Jamie’s own insecurity, reflected through a hungry and impatient ambition involving Jamie’s meteoric rise as a novelist — coupled with a relentless focus”

OnMilwaukee.com: “New theater company debuts with a spectacular ‘The Last Five Years’”
“[Robby] McGhee, who has acted himself, is clearly a director who loves  and trusts his actors… It’s hard to put into words how absolutely riveting [Carson and Stoddard] were. These are not easy songs to handle, but under the astute and sensitive music direction of Colleen Schmitt, the two of them handled the most challenging moments with ease.”

OnMilwaukee.com: “14 best plays of 2014 display an embarrassment of theatrical riches”
“7. The Last 5 Years was the opening production for a brand new company, All In Productions. This show makes the top 14 because they staged an evening of theater that was almost perfect. Julie Swenson, the highly-respected Producing Director of Renaissance, was in the audience opening night and she called the evening ‘magical theater.'”

Listen to our latest podcast!

We’re broadcasting episodes of The All Arcadians, S.H.H., and the All ArcaD&Dians each weekend live on the AIP Facebook page.

Be sure to like and follow the page to stay up to date on the latest broadcasts and to check out past episodes!

Want to stay up to date with everything we've got going on with AIP? Sign up for our newsletter, and updates will be sent straight to your inbox!

Donate to All In Productions

We are grateful for any support you can provide us. Your donations will help us to pay our artists and secure performance spaces for our shows. Learn more about why you should consider supporting our organization!